The full article is behind a paywall, but here’s the gist: on Monday, the Bureau of Economic Analysis released its 2009 estimates of employment, sales, and capital expenditures for multinational companies. Jobs for these companies in the US have declined by 2.9 million jobs between 1999 and 2009, while jobs overseas have increased by 2.4 million (see the WSJ graphic below).

This looks like offshoring — and if there were crimes against labor markets, offshoring would be around the level of a felony, if not high treason. But before you get too worried by all this, read this post from Kash Mansori over at The Street Light. His take:

It’s easy to jump to the conclusion that this data indicates that MNCs are shifting jobs overseas, and that foreign employment growth is coming at the expense of jobs in the US. However, that is probably not what’s going on here. The vast majority of employment and sales by the foreign affiliates of US-based MNCs are serving the local market.

He bases this conclusion by looking at not only the employment numbers, but also the sales numbers. The short version:

Which is to say that US-based multinational corporations are likely creating jobs in sales, customer service, and retail, and that means they are simply creating more ways for the world’s money to head back into the US. 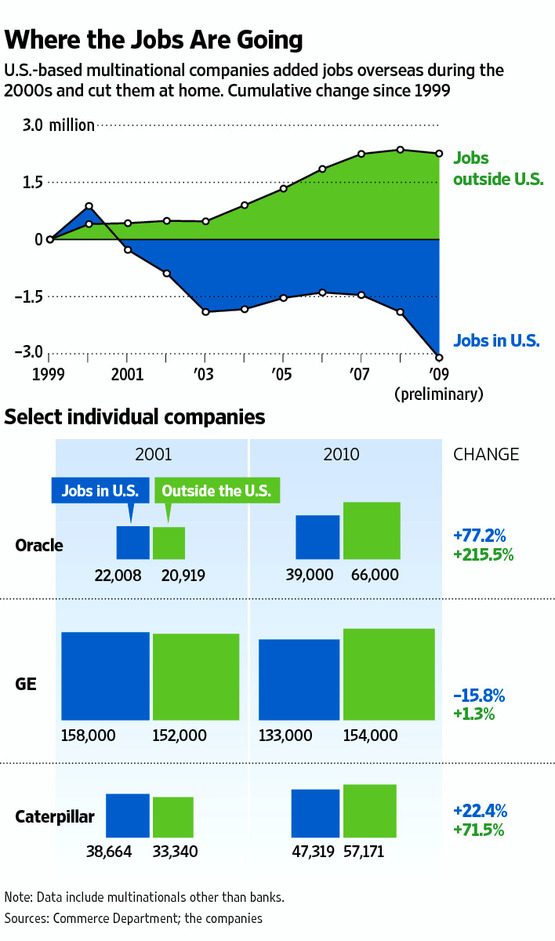