At Emsi Burning Glass, our mission is to unlock mobility and opportunity for every employee, student, and community around the world.

I’m Bledi Taska, and I lead a team of economists and data scientists who look every day at our billions of data points in order to find meaningful insights and human stories. We believe those insights and stories can drive change, and every week, I’ll be sharing some of the highlights from our research.


Welcome to the Letter from the Chief Economist.

Census data and other population reports have shown that people are moving from urban centers to rural areas. But not much had been known about jobs—until now.

Our new report, Rural’s Rise: Shifting Trends in Rural and Urban Job Postings shows that the pattern of job postings have followed the population away from cities and into less populated regions. More specifically, we find that:

That reverses the job posting trend from before 2019.

Job postings for a wide range of occupations have grown more in rural areas than urban, including fields such as healthcare, technology, storage and transportation, and science.

This suggests that people with city-based occupations are more likely to work elsewhere, which is one major cause of the surge of individuals moving to more rural areas. People who can work anywhere want to work in smaller towns. 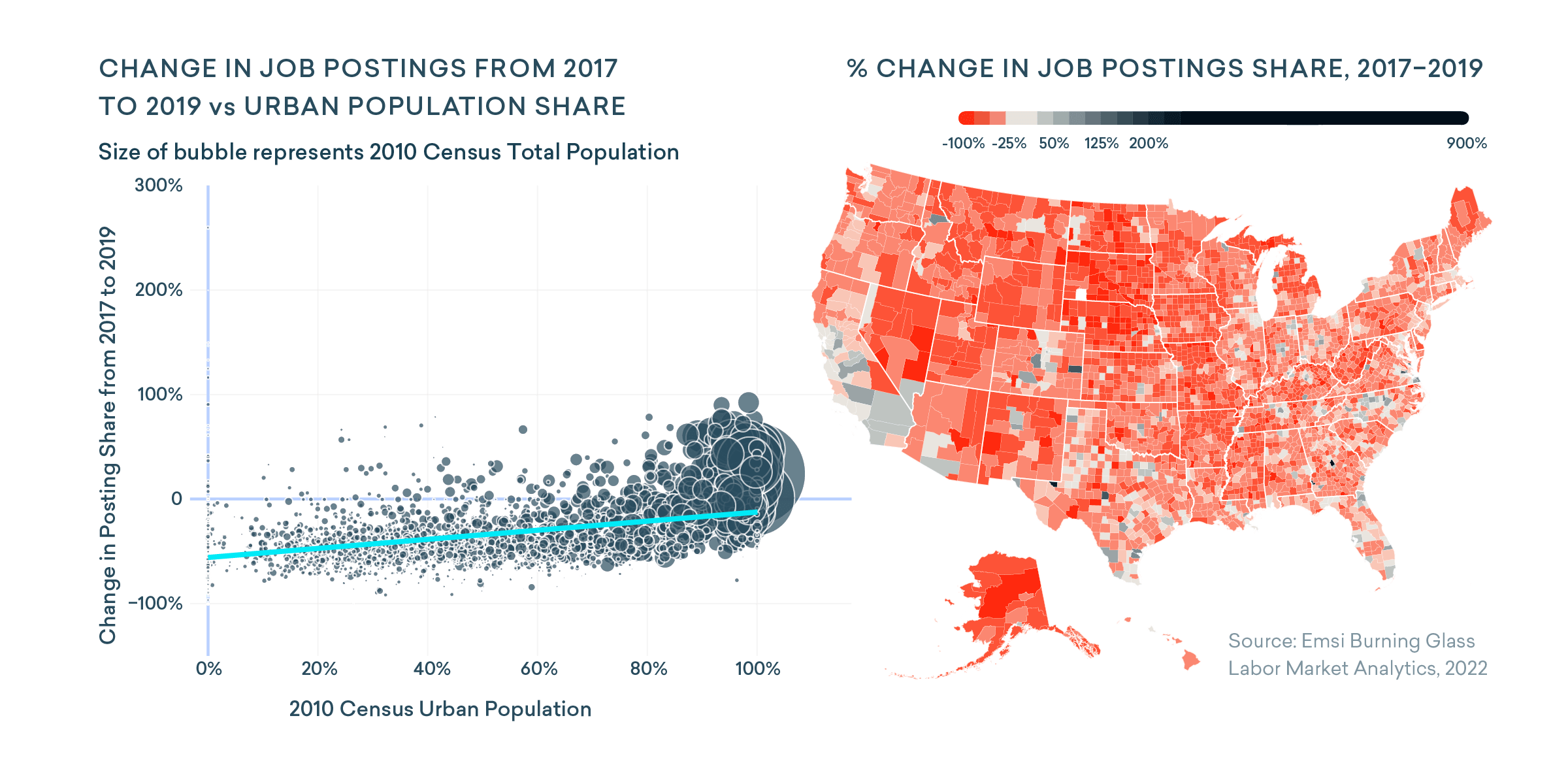 The Consumer Price Index (CPI), which came out last Friday, showed that prices were up 1.0% over the past month and rose 8.6% over the past year—the highest twelve-month increase in over 40 years. Core CPI (excluding energy and food) dropped to 6%, not as much as economists expected. Rising inflation led the Federal Reserve to raise interest rates yesterday by 0.75 percentage points, the highest increase since 1994. Those on our team at Emsi Burning Glass aren’t the only ones producing great research on the world of work. This week, I want to highlight “Work From Home and the Office Real Estate Apocalypse” by Arpit Gupta, Vrinda Mittal, and Stijn Van Nieuweburgh.

Their paper shows that the pandemic has had a huge effect on the value of office buildings in New York. The researchers found that in 2020 alone, office values declined 32%, and a long-term projection estimates that the average office will have lost 28% of its value by 2029—representing $500 billion of value destroyed. The office spaces faring best after this change are the ones that are newest and in the best condition, suggesting the chance that older spaces might be better candidates for being repurposed into residences or other developments.

The permanent shock of remote work is bad news for commercial real estate, but not necessarily for everyone else. As working from home becomes the norm, it’s likely more people will have the flexibility to live in whatever area of the country suits them best. As the Rural’s Rise research shows, many people (perhaps families or retirees) are leaving urban life behind, but there’s a strong chance that younger people looking for culture and other amenities will have more opportunity to move to cities—even if they’re working for employers based somewhere else.

Thanks for reading. Until next week,

Subscribe to the Letter from the Chief Economist, delivered to your inbox every Thursday: